In 1976, Hugh Huelster took the “art supply corner” out of The Hungry Mind bookstore and into its own, standalone space one block down the street…and Wet Paint was born!  There have been two ownership changes (Hugh’s Macalester College classmate, Beth Bergman, bought Wet Paint in 1984, and long time employees Darin Rinne & Scott Fares bought it from Beth in 2017) and three moves (all in the same block, with the last move to our current location in 1993) since then, but one thing that hasn’t changed in 45 years of existence is our commitment to serving our wonderful creative community.  We wouldn’t be here if it wasn’t for you!  And – speaking of not being here – most of our staff wasn’t even alive when Wet Paint started; as one who was, that’s a sobering thought!  It made me wonder what the seven of us who were around in 1976 were doing when Wet Paint first opened its doors.  For me, my first (and only) publishing credit comes from that year, as the original copy of the book I wrote, illustrated, and bound with staples – The Evil Book of Vampires – was received into my elementary school library…I wonder if it has been deaccessioned?

“I was in high school in California playing tennis & waitressing at the local Sizzler.”

“I drove to Provincetown, Massachusetts from Albany, New York with my friend, Sue, to enter our prints in an exhibition juried by Robert Motherwell; neither of us were accepted.”

Framer/Custom Services Manager, Kate Katzer was born in 1976, so she – like we – is celebrating her 45th this year!

“July 4, 1976 I was in the Webster Groves Community Days parade riding in the back of a big, red International Scout truck that was towing an eight foot tall firecracker which had been built and upholstered in red velvet by my dad and grandfather. There was another kid in there with me that was singing two lines from the Carpenter’s song  “Top of the World” over and over. It made for a long parade.”

“I was traipsing around Europe turning 21 and seeing all the art and architecture I had only seen in black and white in Janson’s Art History textbook.”

“In 1976, I was two years old and just learning to draw and paint. I have faint memories of sitting at the kitchen table with my Crayola crayons while the radio played the sweet sounds of the Carpenters “Close to You.”

Man…The Carpenters were huge in the ‘70’s.

Wet Paint has been a part of my life since Beth first hired me in 1988…when a number of our staff still weren’t born!  Over this time, I’ve had the pleasure of working with dozens of smart, talented & interesting people, young & old.  Like with my six “1976 & before” compatriots above, Wet Paint has become my career – a place to work for & with like minded folks.  It’s an honor & a privilege for Scott & I to provide the same meaningful employment to our team that Beth & Hugh provided to us and those before.  On the occasion of this anniversary, I’m excited to think about the next generation that finds a lifelong home at Wet Paint…and takes it into the next 45 years!

After working at Wet Paint for over 25 years, Darin assumed the role of co-owner in 2017. He looks forward to continuing the commitment to service and support of the community that has defined Wet Paint since 1976. 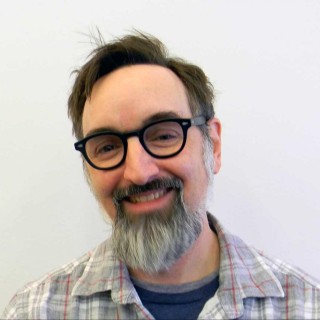 After working at Wet Paint for over 25 years, Darin assumed the role of co-owner in 2017. He looks forward to continuing the commitment to service and support of the community that has defined Wet Paint since 1976.

Do you like looking at pretty pictures while you read? Ever wanted to see an illustrated version of your favorite dystopian book?? Check out our small, curated selection of graphic novels! 📚